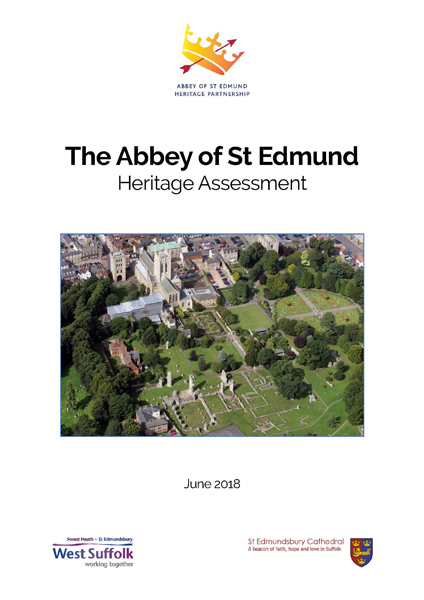 In the early decades of the 10th century the mortal remains of the martyred East Anglian King Edmund were brought to the Anglo-Saxon settlement of Beodricsworth. This was the single most significant event ever to happen in the history of the settlement which was to become Bury St Edmunds, a town which was to go on to experience a long history of significant events. As a direct result of its holding the royal relics, during the medieval period the emergent Abbey of St Edmund grew to be one of the wealthiest and most powerful monasteries in England, and became one of the major pilgrimage sites in western Europe. In the 500 years since the Dissolution, the site has enjoyed a rich and varied ‘afterlife’, which has seen the area develop and adapt with the changing needs and fortunes of individual landowners and the wider town.

This report focusses on the heritage of the former monastic precinct of the Abbey of St Edmund, with a specific emphasis on its historic environment and the heritage assets which are to be found within it. For the first time, this report collates and assesses all of the available historical and archaeological information, characterises the known and potential archaeological and built heritage resource, and reviews the history of the site from the earliest times to the present day.

Two versions of the Heritage Assessment can be downloaded from this page, together with the GIS datasets used in the report:

'The Abbey Church at Bury' by M.R. James

During the course of researching the Heritage Assessment, I discovered the handwritten text of a lecture about the abbey church which was delivered by M.R. James in the Bury St Edmunds Athenaeum on 21st April 1932. The manuscript is held by the Cambridge University Library, where is was accessioned in 1954 as MS Add. 8389. As an unpublished work, the copyright of the lecture is held by James's literary executors who kindly granted permission for me to transcribe, edit and publish the text of the lecture in the 2020 volume of the Proceedings of the Suffolk Institute of Archaeology and History. You can download a PDF copy of this article using the link below: